Not as popular as Pho….yet?

Pho has claimed some serious territory here and has grown popular quickly. According to data from Google, since 2004 compared to March 2021, Pho has grown in popularity by 830%, which is an amazing gain.

Comparatively, for the previous 12 months starting March 2021, Bun Bo Hue is much less popular at a measly 1.2% of the searches for phở. But why isn’t phở’s equally spicy and attractive cousin allowed to join the party?

It has a lot of familiar and identifiable ingredients–a good step in getting people to eat something new. Bun Bo Hue has a few curveballs that could be holding it back from quicker adoption: shrimp paste and pork blood.

America seems to not be ready for this as a mainstay yet, whereas pho’s concept is easily recognizable and pitched as beef or chicken noodle soup. BUT Bun Bo Hue is not something you should look over–definitely give it a shot and you may love it even more than Pho!

The city of Hue was put on the map as Vietnam’s capital in 1802 when the Nguyen Dynasty seized control of the country and ruled from this central city.

This city has a reputation for having spicy foods–not something as common with other Vietnamese cuisine. We believe there’s no real reason for it other than trying to boost flavor when there weren’t other options. Sounds kinda like what you hot sauce fiends out there do yeah?

Hue also just happens to be the origin of many of my favorite dishes. This city is responsible for banh nam, banh bot loc, com hen, and of course Bun Bo Hue. Lez get eating! 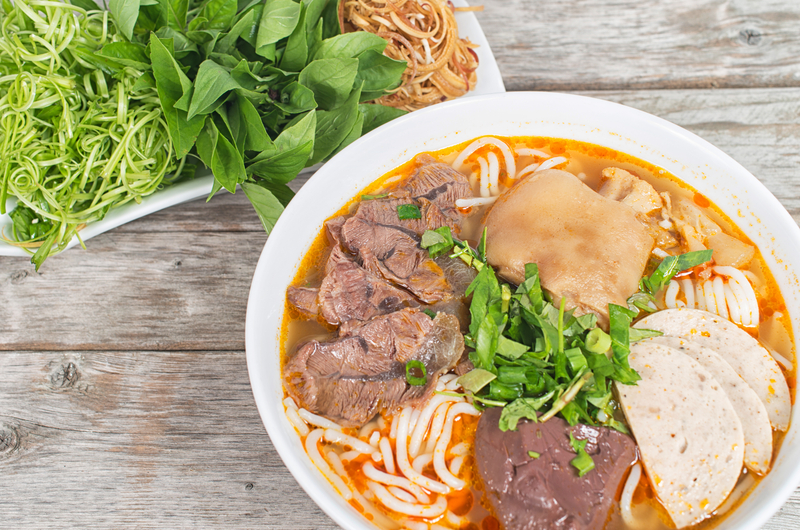 Dining out in a top-quality restaurant...